David Keith & Bill Gates have joined forces to conduct a Solar Radiation Management Experiment in New Mexico without any consideration for the acid rains, air, soil, and water pollution consequences.   Beneficial atmospheric zone depletion is also another another huge problem from these types of experiments.  The idea is for the public to pay for these experiments, use humans as guinea pigs and use the Earth and the Earth's Atmosphere for this type of experimental testing.  (See News Articles July 2012-Below)

AN ATMOSPHERIC RELEASE OF SULFUR (OR ALUMINUM OXIDE), IS PLANNED FOR NEW MEXICO IN A MASSIVE SOLAR RADIATION MANAGEMENT RESEARCH EXPERIMENT WITHOUT YOUR CONSENT OR KNOWLEDGE.   The dates, times, and exact location of these release is being withheld from the public.

The New Mexico Section of the ADC Website has provided a petition (below), and other information regarding this atmospheric research experiment.  NASA is involved because the experiment may be conducted at their facility without public consent, government hearings or other public involvement in this experiment.  (Note from March 13, 2014 - The public does not know if, or when, this experiment was conducted.  Once the information was made public any information about this project was no longer available to the public.  This would be a good research project to find out the current status.)

The consequences of placing sulfur (or aluminum oxide), into the atmosphere is risky, according to their own interviews with the media and at conferences where this clique of promoters has been speaking out  promoting these experiments for years.  We encourage everyone to oppose this project and also to study human health problems with sulfur, the depletion of beneficial atmosheric ozone when sulfur combines with water vapor (a greenhoues gas), and chlorine, along with possible weather or climate changes.

The following Sulfur Report ( CA EPA & OEHHA February 2011), gives us the human health problems when the sulfur particulates return to Earth.  "Evidence on the Developmental & Reproductive Toxicity of Sulfur Dioxide"   (Other Reports are available below under either the Health or Sulfur Headings provided below.)  http://oehha.ca.gov/prop65/hazard_ident/pdf_zip/So2HID022511.pdf

An Atmospheric Geoengineering Experiment is scheduled to take place in Fort Sumner, New Mexico in the near future.  KOB-4 News aired this story on July 17, 2012 entitled, "Earth Cooling Experiment".  According to the news report, “…some scientists warn that widespread use of SULFUR (OR ALUMINUM OXIDE), could have a Negative Impact on the Earth's Weather Systems."

The New York Times featured a more in-depth story on this very same topic of artificially cooling down the Earth using sulfate aerosols.  David Keith, who manages a $Multi-Million Geoengineering research fund (provided by Microsoft's Bill Gates), have joined forces to conduct an atmospheric experiment in New Mexico without consideration for potential beneficial atmospheric ozone depletion, acid rains, air, soil, and water pollution consequences.  The New York Times article further states that a similar test was scheduled in Great Britain, but after much controversy, this project was rejected due to public protest.

We the people of New Mexico need to take a firm stand and start asking some serious questions:

We need to take action NOW and protect our drinking water, our air, and our citizens from human health impacts before it is too late. The choice is yours to make and your decision will impact your children, grandchildren, and your health.

The only information lacking from the small "clique" that wants to conduct this test is the amount of sulfur to be released into the atmosphere and the date of the experiment.  They don't intend to write an environmental impact report nor do they intend to involve the public in this process even though "lip-service" that the public should be involved in these decisions has been proclaimed by the "clique" promoting Geoengineering.  Many of the risks are known but this small "clique" of promoters has decided that they can play GOD with our atmosphere and use the Earth and its inhabitants as their guinea pigs along with public funding (through NASA), and other government entities by using our tax dollars for this experiment.

"No one has the right to use the Earth, or the Earth's atmosphere, as a Giant Experimental Physics Laboratory due to the unknown and risky consequences of such actions".  Rosalind Peterson

To volunteer in any Capacity to STOP or Prevent this Geoengineering Experiment in New Mexico Contact:

GOVERNMENT CODE SECTION 54950-54963 – Section 54950.  “…In enacting this chapter, the Legislature finds and declares that the public commissions, boards and councils and the other public agencies in this State exist to aid in the conduct of the people's business. It is the intent of the law that their actions be taken openly and that their deliberations be conducted openly.  The people of this State do not yield their sovereignty to the agencies which serve them. The people, in delegating authority, do not give their public servants the right to decide what is good for the people to know and what is not good for them to know. The people insist on remaining informed so that they may retain control over the instruments they have created...”

August 21, 2012 - AM 1490 WGCH Connecticut Radio
"Live Well With Cantwell" Radio Show
Topic - New Mexico Geoengineering Project Solar Radiation Management - Using a NASA Facility at Fort Sumner to introduce water vapor and sulfur into the atmosphere which could deplete beneficial atmospheric ozone, tree decline due to acid rains, and could cause human health problems along with air, water and soil pollution.  Join Pauline and her guest Rosalind Peterson to discuss this project and its environmental implications.
http://archives.warpradio.com/btr/wgcharchives/LiveWellWithCantwell/082112.mp3

Please Note:  There have been three U.S. House of Representatives Hearings on Geoengineering in conjunction with the UK Parliament between 2009-2010, along with a joint agreement to work together on Global Geoengineering Governance.       Click on the UK Report link below or visit the following link to learn more about these hearings:  http://www.agriculturedefensecoalition.org/content/geoengineering-current-actions)

198B 1 2012 Geoengineering Definitions+History The Tyndall Report June 2012 This Report Worth Reading.pdf

What do we know about the Proposed New Mexico Solar Radiation Management Experiment?

198B 3 2010 Feasibility of Space-Based Monitoring for Governance of Solar Radiation Management Activities AIAA2010-3.pdf

A Small Group of Dominant Geoengineering Promoters (some having various conflicts of interest), are behind this Risky New Mexico Research Experiment & Promoting other Risky Experiments in the U.S. and Around the World.

Why does this small "clique" want the people of the Earth, without their consent, to be used as guinea pigs for these experiments and also why do they want U.S. taxpayers to pay for it?  (The push for a carbon tax to enrich themselves at our expense?)

198D 2 2011 The Clique That is Trying to Frame the Global Geoengineering Debate December 5, 2011 Guardian.co.uk by Hamilton.pdf

Note that Sulfur (or aluminum oxide), particles return to Earth once released into the atmosphere.  Note the potential health impacts and also the potential for acid rains, weather pattern changes and disruptions.

Note that NASA also has a facility which could be used for this Geoengineering Research Project in Palestine Texas:    http://www.csbf.nasa.gov/map/balloon4/balloon4.htm

198G 1 2012 Geoengineering Experiment Canceled due to Perceived Conflict of Interest SPICE May 16, 2012 Guardian.co.uk.pdf

Note that Rockets have been used for atmospheric chemical releases and research experiments for years without public consent:   http://www.agriculturedefensecoalition.org/content/categories?q=aluminum

198K 1 2012 Could an Artificial Volcano Cool the Planet by Dimming the Sun by Vidal Environment February 6, 2012 Guardian.co.uk.pdf

198K 1 2012 Geoengineering Experiment Canceled Due to Perceived Conflict of Interest SPICE May 16, 2012 Guardian.co.uk.pdf

(More Listed on the Geoengineering Sections of this Website)

Note:  The State of New Mexico & the EPA have State Standards for the Release of Sulfur into the Atmosphere. http://www.nmcpr.state.nm.us/nmac/parts/title20/20.002.0040.htm

Titanium Dioxide Has Also Been Recently Proposed for Atmospheric Releases

198V 1 2012 An Analysis of Climate Engineering as a Response to Climate Change Copenhagen Consensus on Climate Report.pdf

16YF 6 2007 The Climate Engineers by Fleming Playing God to Save the Planet The Wilson Quarterly 2007.pdf 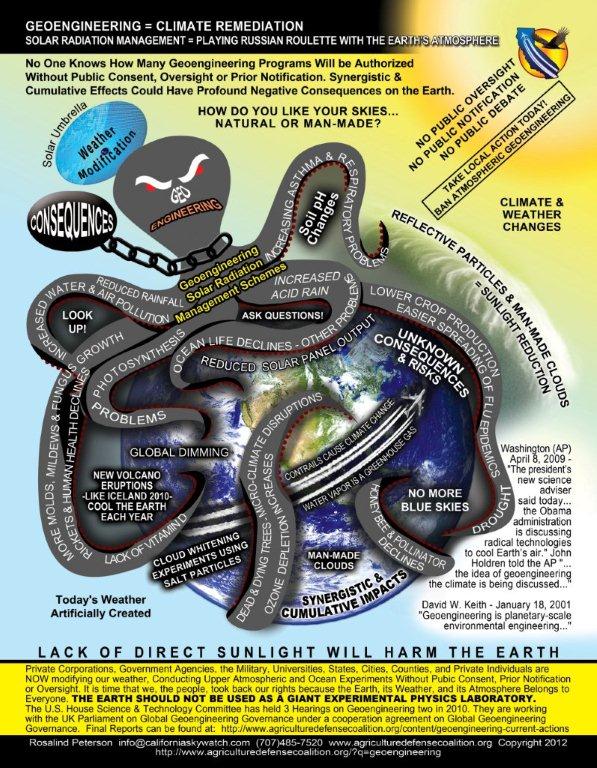 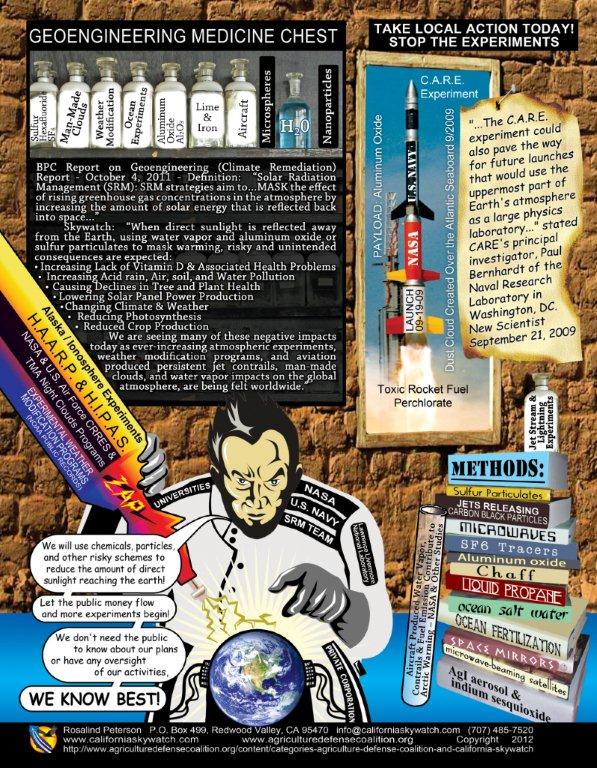 Business Insider "Geoengineering" Article, Video & Graphic - July 18, 2012  "...UPDATE: We received a statement from Harvard press office about Keith's work and his response to the Guardian article and thought we should share it with you.  We have been and are currently exploring possible new strategies for interrogating the stratospheric system without affecting the background stratosphere in any quantitative way. To date, we have not written any proposal to actually do so. We want to be absolutely clear that that we have no plans to implement a geoengineering field study to release “thousands of tonnes of sun-reflecting chemical particles into the atmosphere to artificially cool the planet, using a balloon flying 80,000 feet over Fort Sumner, New Mexico.”

"...A New York Times Green blog post about the research said the following:  The experiment, which would be conducted from a balloon launched from a NASA facility in New Mexico, would involve putting "micro" amounts of sulfate particles into the air with the goal of learning how they combine with water vapor and affect atmospheric ozone.  The researchers, James G. Anderson, a professor of atmospheric chemistry, and David W. Keith, whose field is applied physics, said the amounts involved would be so small that they would have no effect on climate — locally, regionally or globally. "This is an experiment that is completely nonintrusive," Dr. Anderson said..." (Note the conflicting reports which don't resolve this issue and also the Video of David Keith speaking about this issue.)

"...CNN called Arnie Gundersen to learn about the use of kitty litter at the DOE’s Waste Isolation Pilot Project facility in New Mexico, which is being blamed for radiation leaks. Out with the new kitty litter, back to the tried and true..."